19-Dec-2014 Update:
We have tested this on the latest update Android 5.0.1 and Google still hasn’t fixed this issue. In the mean time Port 2101 still needs to be used.

22-10-2014:
Recently Google announced and released Android 5.0 Lollipop and is expected to roll out to many devices around November 2014.

This is an optional upgrade for your device (when it becomes available) and you are not forced to update it, however many new devices may have Android 5.0 Lollipop pre-installed.

We have been testing this new operating system, including the developer preview (Android L) and we have found a major incompatibility issue in the way it communicates to the M1 panels.
END_OF_DOCUMENT_TOKEN_TO_BE_REPLACED

Our M1 Touch app is featured in the Electronic House Magazine this year! 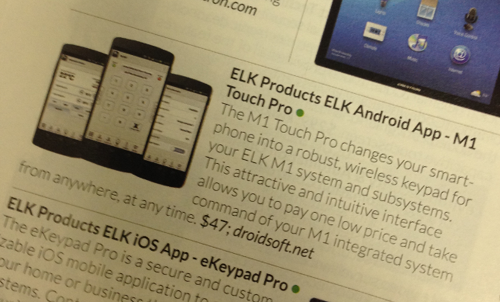 We are excited that our apps M1 Touch Pro & Ness aComms both have made it into the Google Play charts and are within the top 50 apps in Australia.

Thanks to all those that have downloaded them to make them go into the charts.

We have finally got our site online!

Be sure to check out our site often as we will be posting sneak peeks on upcoming updates and features in our apps.